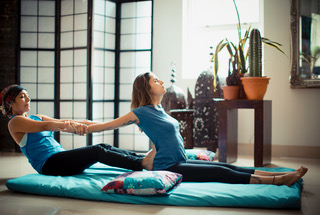 Yin yoga is a variety of yoga that focuses on the mind. Yin yoga allows you to reduce stress, kill off worries and enter a deep state of relaxation that’s more akin to meditation.  Bodywork Massage offers Yin yoga in London.

Yin yoga in London helps you to reduce ‘mind chatter’ that’s a major cause of stress in modern living. Many of us are overloaded with mental activities due to social media, work commitments and the like. Yin yoga provides a fail-safe release from this onslaught of constant mental activity.  Many describe Yin yoga as an ‘antidote’ to the stress created by modern life in the 21st Century.

How does Yin yoga work?

In the technical sense, Yin yoga is a slow-paced variety of yoga. This makes Yin yoga highly popular in London, since many people wish to utilise yoga in the fight against stress caused by London’s fast-paced living.

Yin yoga’s poses are held for a greater period of time when compared to other forms of yoga. Some advanced Yin yoga practitioners hold these poses for around five minutes in total!

Thus, Yin yoga improves the circulation in joints. Also, your general flexibility will be greatly improved.  Yin yoga also has many mental benefits. This is because Yin yoga helps to promote inner silence. For this reason, some have compared Yin yoga to traditional meditation.

What are the long-term benefits of Yin yoga?

The long-term benefits of Yin yoga include:

To book your first Yin yoga or to learn more information about this incredible yoga technique, contact Bodywork Massage today on 07904 786 888. Alternatively, contact us through this website. We sincerely look forward to introducing you to Yin yoga in London.